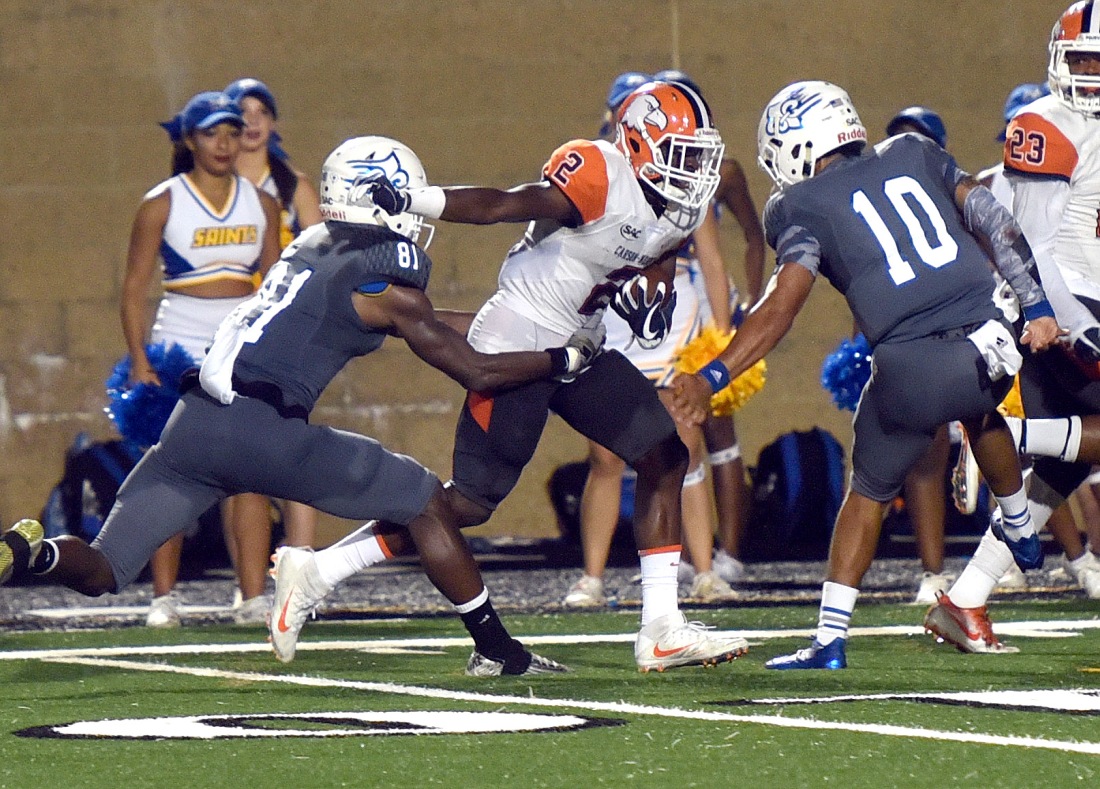 JEFFERSON CITY, Tenn. – After traveling more than 2,800 miles in the first five weeks of the season, a familiar face will greet Carson-Newman (3-2, 2-1 South Atlantic Conference) when it returns home to Burke-Tarr Stadium Saturday at 1 p.m.

The Eagles will match wits with the Limestone Saints (0-5, 0-2 SAC) and their first-year head coach Tony Ierulli in week six.  Ierulli spent the last six seasons as an assistant with the Eagles, coaching  both the offensive and defensive lines.

“We’re all excited about him getting the job because he wanted to go back and be a head coach again,” Carson-Newman head football coach Mike Turner said. “He gets the job and you think, ‘well there’s going to be one day where we’ve got to play each other.’ That’s the part that’s not good. When you’ve got people that have coached with you before and then you coach against them.

“He’s coached on the offensive and defensive sides here at Carson-Newman, so he knows what we do and what we’re about very well. But we can’t worry about that, we’ve got to take care of Carson-Newman. We tell them every week, it’s not a cliché, it is Carson-Newman vs. Carson-Newman. If we play well, we get after people, we take care of the football, we’re a pretty good football team. When we don’t do that, we’re in trouble.”

Ierulli’s staff also has a little C-N flair to it.  Coy DeWeese is the Saints defensive ends coach.  DeWeese’s father John played on Carson-Newman’s national title teams in the 1980s.

Last year Carson-Newman was the only team to play turnover free against Limestone. The Eagles won last year 31-20 and lead the all-time ledger 3-0.

In fact, Carson-Newman and North Greenville (2016) are the only teams to play turnover free against the Saints in the last three seasons. The Saints have picked off a pass in every game this year. Their seven interceptions are the second most in the league, tied with Carson-Newman.

The Eagles will be efforting to actually take advantage of those turnovers.  Carson-Newman hasn’t converted a takeaway into points since the season-opener.  The Eagles have scored once off eight turnovers all year.

Carson-Newman has played the 30th toughest schedule in the country, a figure that might actually belie the true nature of the Eagles’ first five weeks.  Four of five came away from the friendly confines.  Week one and two foes West Florida (11th) and Virginia Union (RV) are factored into the AFCA coaches poll and both those games were played on the road. Weeks three through five opponents Wingate, Newberry and Catawba were all picked immediately behind Carson-Newman in the preseason SAC poll.

“This schedule’s strengthened them inside. It’s strengthened them outside,” Turner said. “I think they understand now what it means to be together as a football team. What it means to be put in adversity, and Saturday they faced adversity. They faced it squared up and showed up, nobody flinched. That was something I was very proud of them for. I also know that we put them in harm’s way for five weeks, that’s a heck of a football schedule. But now you should be a better football team, you should know more about yourself, there shouldn’t be any questions marks. There shouldn’t be any problem about trusting each other. We should know what we have to do to get the job done.”

Limestone is led offensively by 2017 SAC Freshman of the Year Jer’Koya Patton.  The running back rushed for 135 yards and a score last year against the Eagles, the most any individual back ran for against Carson-Newman last year.  This year, Patton has 340 yards on the ground, but hasn’t found the end zone.  The sophomore has logged a pair of 100-yard games this year.

“They do a good job scheming against the defense, they’re one of the football teams like a Catawba and they’re gonna run that thing downhill on you,” Turner said. “You’ve got to make sure you fill the gap, so that you don’t get washed out and you’ve got to have gap integrity.”

Carson-Newman will also need to be concerned with a Marshall transfer at quarterback in DJ Phillips. He threw for a career-high three touchdown passes and a season-best 329 yards last week

Phillips, who ranks second in the SAC with 225.3 yards per game, tossed TD passes of 49, 77, and 67 yards against the Lions. Cody Rau had a career day against Mars Hill, finishing with seven catches for 175 yards and a pair of long TDs, while JoJo Watson added five catches for 116 yards and a touchdown.

Scoring has been a smidge of an issue for Limestone’s offense this year. In spite of dropping 41 in a 10-point loss to Mars Hill last week behind a season-high 417 yards of total offense, the Saints still ranks last in the SAC in total offense (308.4 ypg) and points scored (19 ppg).

The Saints are in their fifth year of existence as a program. They spent two years as a scheduling partner with the SAC before joining the league as an associate member last year.  In their brief history, the Saints have beaten every team in the league with the exception of Wingate and Carson-Newman.

Kickoff between the Saints and Eagles is set for 1 p.m. Saturday Coverage of the contest will start at noon on the Eagle Sports Network with the AEC Tailgate Show on Joy 620 (WRJZ-AM, Knoxville), Mountain Country 106.3 (WPFT-FM, Sevierville) and online at cneagles.com/live.

View all posts by 865sport