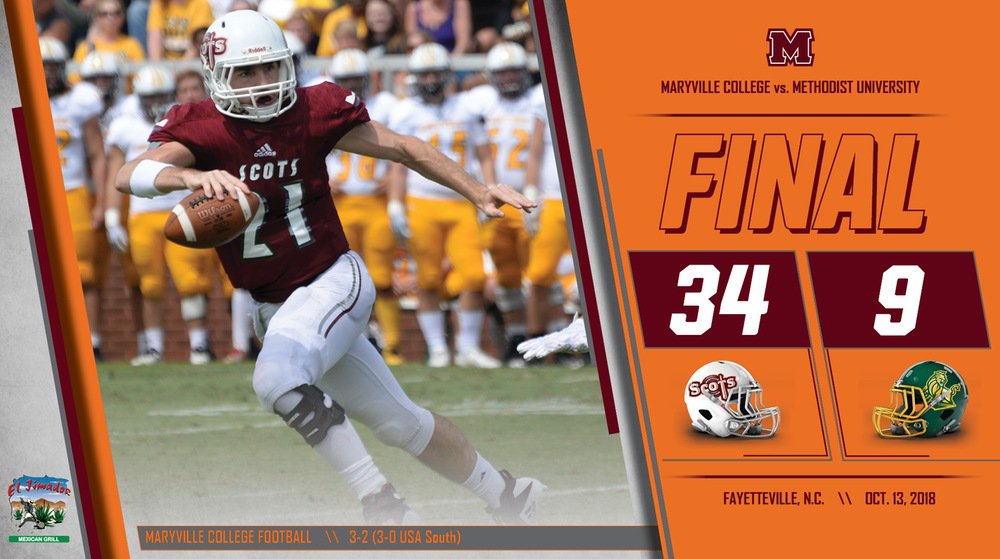 Maryville uses big half to down Methodist.

After a back-and-forth first half, Maryville College outscored Methodist University 24-0 in the second half to take a 34-9 USA South victory, as Elijah Chenier continues his climb up the MC record books.

Quarterback Nelson Smith and Chenier – Maryville’s running back – led the way for the Scots, the squad rolled up more yards in the second half than the Monarchs amassed all game.

MC had 248 second-half yards, as a stellar defensive effort by Maryville held Methodist to just 233 total yards on 60 plays. MC totaled 435 yards for the game.

Smith went 15-of-22 on the day, as he tossed 180 yards and a pair of touchdowns. The first-year signal caller also had 22 yards across the ground for Maryville.

On Saturday, Mac Seagle had three catches for 66 yards, as Terry Stewart added 60 yards on four catches. Clayton Ogle had a pair of snags for 19 yards and a touchdown, as Juwan Hill had a touchdown on one catch for 4 yards.

Marcus Pierce followed Chenier’s ninth-career 100-yard contest with 58 yards on 10 carries for a touchdown. Pierce added three catches for 28 yards, as Jacob Bunch had 49 yards and a touchdown on seven touches.

Defensively, Trey Melton had seven tackles with one stop for loss. Cedric Brown added six stops, as Michael Bailey had a huge game with four tackles, two tackles for 12 yards of loss, a field goal blocks and an extra point scoop after a block.

Ian Hubbs went 2-for-3 on field goals that included kicks of 25 and 30 yards.

For Methodist University, it was Devan Cox who went 9-of-20 for 82 yards, as Steve Keoni was 5-of-11 for 64 yards and a score. Josh Carter had five catches for 65 yards and the Monarchs’ only touchdown, as Vontre Howard added 67 yards on 14 carries.

Methodist (1-4, 1-2 USA South) would use a 30-yard return by Nick Wade on the game’s opening kickoff to set the Monarchs up to score first. Keoni added a 29-yard rush, before Maryville’s defense bowed inside the Scots’ 10-yard line. Hunter Baldwin kicked through a 24-yard attempt at the 11:58 mark to take a 3-0 lead early.

With 3:31 left in the opening quarter, Maryville (3-2, 3-0) would answer. A Ron McGriff sack pinned Methodist deep, as Bobby Haggerty’s punt landed at the Methodist 45. Chenier had a 13-yard rush, before Smith found Stewart for a 16-yard completion. The drive stalled, however, at the Methodist 9 yards line, as Ian Hubbs‘ 25-yard attempt rank true for a 3-3 score.

The game would go scoreless until the 2:49 mark before the half. Brian Stone picked off Nelson Smith‘s pass at the Methodist 25 to set up a Monarch score. A 60-yard pass from Keoni to Carter would cap a three-play, 75-yard drive with the game’s first touchdown. Baldwin’s extra-point attempt was blocked, leaving the score a 9-3.

Maryville used key clock management in the final minutes of the opening half to take a 10-9 lead to the locker room. The Scots used an 11-play, 71-yard drive that saw Smith go 4-of-6 for 45 yards. The freshman quarterback added 13 yards across the ground on the drive before finding Ogle from 10 yards out on the half’s final play. Hubbs’ extra point was good for a one-point MC lead at the half.

Maryville had 187 first-half yards, as they Scots held the Monarchs to just 125 total yards. Maryville played an even offense in the half with 91 yards across the ground and 96 yards through the air for the lead.

The Scots used a long march on the opening drive of the second half in order to extend their lead. Maryville marched 62 yards in 12 plays that spanned 6:48. Trevor Thomas had a rush of 22 yards, as Chenier had carries of 17 and 10. The Monarch defense would hold strong in the red zone, however, as MC settled for a 30-yard field goal from Hubbs for a 13-9 advantage at the 8:09 mark of the third quarter.

Maryville again put together a long drive to start the fourth quarter. The seven-play, 75-yard drive extended the Scots’ lead to 11, as Smith led the way. The freshman went 4-of-5 for 65 yards, as he found Hill from 4 yards out. Smith’s second passing touchdown of the day gave Maryville a 20-9 lead with 10:41 left in the game.

The Scots defense would rally to help score MC’s third touchdown of the day. Michael Bailey blocked Baldwin’s 28-yard field goal, before Jeremy Hardnettwas able to scoop it up and return it to 46 yards. An illegal block penalty would set the Scots on up the Monarch 42-yard line, as MC needed just two plays. Pierce’s first carry went 3 yards, before his second covered the final 39 yards needed for the touchdown. With 6:42 left in the game, Maryville held a 27-9 advantage.

The Scots forced a turnover on downs late in the fourth quarter, as they took advantage. The five-play, 35-yard drive saw Chenier carry a pair of times for 30 yards to take second all-time. Bunch covered the final 4 yards on the ground to give the Scots a 34-9 victory with 3:07 left.

Methodist would threaten, marching all the way to the Maryville College 4-yard line, before the Scots’ defense held strong to shutout the Monarchs in the second half.

Maryville will look next to LaGrange College. MC travels to LaGrange, Ga. next Saturday, Oct. 20, as kickoff is set for 2 p.m.

View all posts by 865sport